Reactions to ingested foods are rare (adverse food reactions or AFR); generally the incidence is cited as between 1 – 5% of dermatological disease in dogs and cats and around 10 – 15% of non-seasonal, non-parasitic, allergic dermatitis in dogs (Muller et al, 2001).

No breed or sex predisposition is recognised. Although a significant proportion of cases occur in dogs less than 12 months of age (Harvey, 1993; Rosser 1993), most dermatologists agree that there is no true age predisposition. Risk factors have not been identified for cats and little is known about the prevalence of AFR in horses.

Less commonly the gastrointestinal tract is involved and signs may include one or a combination of the following: vomiting, diarrhoea, abdominal pain, flatus, borborygmus and weight loss.

When clarifying the diagnostic criteria for Canine Atopic Dermatitis (2009) Favrot’s group attempted to differentiate between cases of food induced and non-food induced disease in recognition of the fact that dogs suffering from adverse food reactions may be clinically indistinguishable from those with classical AD.

Concurrent dermatological and gastrointestinal disease is recognised and may be more likely in cases of food-induced AD where disease is also more likely to be non-seasonal and poorly responsive to corticosteroid therapy.

In the cat eosinophilic enteritis and inflammatory bowel disease have been associated with AFR.

There is some evidence to suggest that food reactions may rarely manifest as respiratory, neurological, musculo-skeletal or urinary tract disease (Day 1999).

Otitis externa may accompany generalised skin disease but can be the only clinical sign (Rosser 1990).

Adverse food reactions may be intermittent or episodic if the offending foods are given sporadically, and may also be non-pruritic unless aggravated by concurrent disease (Scott 1995).

Adverse reactions to food encompass dietary hypersensitivity, which has an immunological basis and dietary intolerance which is a non- immunological, physiological response to a food. Clinically these conditions are indistinguishable (Scott 1995) and can only be diagnosed based on the response to a strictly controlled elimination diet followed by food provocation.

The antigenic components of food are usually heat, acid and enzyme stable proteins and glycoproteins (Tizzard 1999). In some cases, however, the immunogenic substance may be a product of digestion, for example successive pepsin hydrolysis of cow’s milk yields several novel protein allergens (Bahna 1985).

The presence of IgE antibodies is considered significant (Johansson et al 1994) as a marker of systemic exposure to dietary components but does not confirm type 1 hypersensitivity as the cause of clinical signs or permit a diagnosis of “food allergy”.

Factors such as gastro-intestinal inflammation or selective IgA deficiency may favour exposure of allergens to gut-associated lymphoid tissue, resulting in elevated serum concentrations of antibodies to dietary components. Under normal conditions secretory IgA binds dietary allergens ensuring they are shed into the bowl lumen or, if absorbed, are removed by the liver without provoking an inflammatory response (Batt et al 1999).

The American Academy of Allergy and Immunology have defined dietary intolerance as those adverse reactions to food that are not immunologically mediated.

There are several proposed mechanisms;

Food idiosyncrasies, where an animal responds abnormally to a food. Examples include gluten enteropathy and lactose intolerance.

Metabolic reactions, where a food component affects the animal’s metabolism.

Examples include tyramine and histamine:

If dietary intolerance leads to gastro-intestinal inflammation and/or altered gut permeability there may be elevated serum concentrations of non-IgE antibodies to food components (effect rather than cause).

In many cases of AFR a single component of the diet is implicated. Foods are usually protein rich and in dogs and cats, cereals, dairy products and beef are most frequently involved (Carlotti et al 1990; Harvey 1993) along with fish, chicken and eggs.

In the horse wild oats, clover and alfalfa have been recognised as antigens (Tizzard 1999).

A definitive diagnosis of AFR requires the use of an elimination diet followed by test meal investigation. This process involves exclusively feeding a novel protein and carbohydrate diet for up to 13 weeks, although a significant degree of improvement should occur within 4-6 weeks, (Muller et al 2001).

Traditionally, simple diets such as home prepared lamb/chicken/ turkey and rice have been recommended, without any investigation into the suitability of such diets.

Evaluation of the immunogenic compounds in milk and beef has identified bovine IgG and phosphoglucomutase as major allergens and implicated them as major allergens in lamb. These allergens could play an important role in cross reactivity between beef, milk and lamb, suggesting that lamb is not a suitable source of dietary protein for dogs allergic to bovine products (Martin et al 2004).

Studies have demonstrated that some dogs proven to suffer from AFR (diagnosed following elimination diet and challenge exposure) produce high levels of IgE and IgG to antigens present in the food(s) responsible for their clinical signs. (Halliwell 2004) (Gonzalez et al 2004). 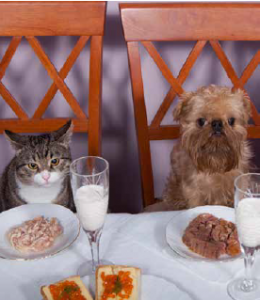 Serological testing may be useful as follows:

A diagnosis of AFR can only be made retrospectively based on the response to an appropriate elimination diet followed by provocative testing.