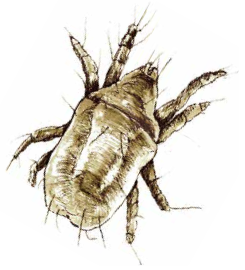 Controlling humidity is of major importance, mite populations stop growing and die out when the relative humidity is <60%.

Clinically normal, as well as hypersensitive, animals may test positive to house dust mites, therefore serological results must be evaluated in conjunction with clinical signs. 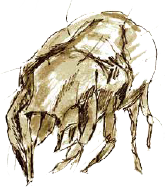 Cross reactivity may explain positive reactions in dust mites sensitised patients where exposure to storage mites is thought to be unlikely.

Whether or not there is also in-vivo cross reactivity to the mites is unclear; the results of both serology and intra-dermal skin testing support the possibility of developing clinical signs following exposure to a novel but cross-reacting antigen (Saridomichelakis et al 2008).

Storage mites are found in cereal based foods; their presence will eventually result in significant spoilage. Populations expand rapidly in warm humid conditions in contaminated food.

Methods to decrease exposure include changing from a dry to a tinned or fresh food diet. If this is not practical dried food should be purchased in small quantities and stored in dry, airtight containers that are thoroughly washed and dried once emptied. Food residue in the bottom of the container may be heavily contaminated and should be discarded.

After feeding it may be helpful to wipe clean the animal’s face or muzzle.

Cockroach allergy is common in man; although less of a problem in domestic animals positive serological reactions may occur and reflect either exposure or cross reactivity with dust mites. The structural protein tropomyosin, which is common to some species of cockroach, mites including the Dermatophagoides spp. and shell fish, may be responsible for this cross reactivity (Eggleston, Arruda 2001).

The significance of airborne particle size

The size of airborne particles determines both the time taken for them to “settle out” in still air, and their destination within the respiratory tract following inhalation.

Small particles, up to 2 microns, are airborne for up to 6 hours, following inhalation they may reach the alveoli.

Particles between 2-10 microns may settle in as little as 15 minutes, following inhalation some reach the bronchi/bronchioles. Examples include fungal spores, dander, smoke and diesel particles.

Particles between 10-20 microns settle in 4-15 minutes in still air. They are filtered out in the nasal cavity and do not reach the bronchi. Examples include small pollen grains, mite droppings, certain cockroach allergens and some fungal spores.

Particles larger than 40 microns settle rapidly and are rarely inhaled.

Almost all pollens that are allergens are from anemophilous species (pollinated by wind). Anemophilous pollen grains are light and non-sticky, so that they can be transported by air currents. Grasses (Poaceae) are the most important producers of aeroallergens in most temperate regions, with lowland or meadow species producing more pollen than upland or moorland species.

Pollens show seasonal as well as geographic variation in prevalence in the environment. Patients suffering from pollen allergies may initially have seasonal disease with clinical signs over the spring and summer months, coincident with high environmental levels of the particular pollen(s) to which they are sensitised. Over time seasonal disease may become perennial. The peak pollen season extends from March to September but can begin in January and end as late as November. Horses may be exposed to pollen throughout the year depending on the type and quality of hay offered.

Cladosporium is the most frequently encountered mould in air. Indoor concentrations reflect the outdoor concentration of the airborne spores. Levels of this mould rise in the spring and peak in late summer and autumn.

Alternaria is also an outdoor mould which blooms during warm weather.

Higher concentrations of spores from outdoor moulds are found in rural compared to urban environments.

Indoor moulds can be found on spoiled food (stale bread, cheese, fruit), behind wallpaper, on walls suffering from damp, around and within refrigerators.

Moulds commonly grow on window frames when there is condensation on windows and on the soil of houseplants. The damp environment caused by tumble dryers, baths and showers make the kitchen and bathroom prime sites for mould growth and high spore concentrations.

Aspergillus and Penicillium are two of the most commonly encountered moulds found indoors; they are present all year round although spore concentrations peak during winter and spring.

Flea allergic dermatitis (FAD): This is the most common form of allergic skin disease seen in the dog and cat in flea-endemic regions. Type 1 and type IV hypersensitivity reactions to allergens in flea saliva are involved in the pathogenesis in dogs; mechanisms of FAD in the cat are unclear.

This pruritic skin condition shows a classical distribution affecting the back, dorsal lumbosacral region, perineum, tail, caudal/medial thighs and abdomen. Unlike flea infestation, the severity of clinical signs is independent of the numbers of fleas on the animal.

Sweet-itch: Biting flies such as midges, black flies, mosquitoes, horse and stable flies can be highly problematic for some horses. In most cases this is due to a hypersensitivity reaction to insect saliva which is inoculated during feeding. 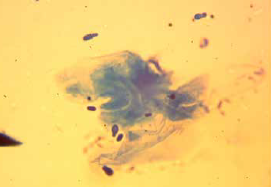 Staphylococci and Malassezia are commensals at various sites on canine skin including the nares, axilla, groin and perineum. If the epidermal barrier is breached (trauma, epidermal barrier dysfunction, endocrine disease) colonisation and infection may occur. Some patients develop hypersensitivity to these organisms which exacerbates pruritus. Serological testing may identify affected animals and direct therapy.